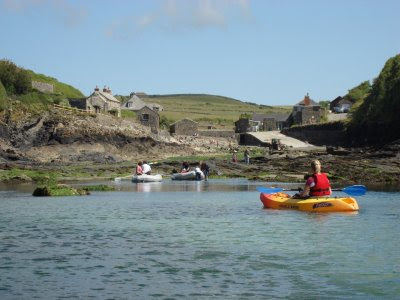 There are plenty of enticing scenic spots in North Cornwall but none so as off the coast of Port Quinn paddling in a kayak. On days when the sea is at rest and the sun is high, the pleasures know 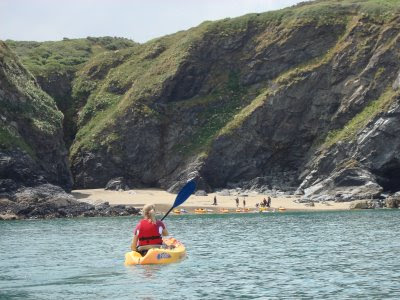 no bounds.
Port Quinn is a former fishing settlement now consisting of four National Trust holiday cottages and one or two houses girded around an easily approached cove, ideal for canoeists, fishermen, snorkelers, stunning cliff walks, and the like. It's just down the road from Port Isaac, the more famous village. The former community of Port Quinn has a sad history, known by some as 'the village that died' after the entire male population disappeared mysteriously in the 19th century, all of which adds a mystical charm – the stock and trade of many Cornish villages!

A picnic seemed in order so Randi and I headed off on a perfect day when the wind had dropped to less than 1 mph and the sea resembled a pane of glass. Around the headland of Port Quinn, Doyden Point, there are some beautiful almost inaccessible beaches such as Lundy Beach and one or two other sandy spots, only accessible by sea vessels.

We paddled our way around the cliffs, with a variety of birdlife in the sky and on the sea’s surface to entertain us, as well as a plucky fisherman poised precariously half-way down a cliff and a couple of actual cli 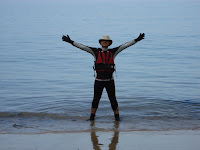 ff climbers. We thought that the cliff climbers could have taken a leaf or two out of the fisherman’s book who seemed to have descended to his spot without the use of guide ropes! Fishermen are like that aren't they? Real mountain goats! In Cornwall we lose some every year, especially the tourists who don't beware the 'seventh wave!' The first six follow the same pattern of ebb and flow but the seventh metaphorically breaks the rule. 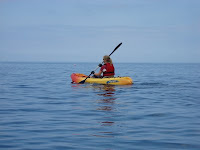 We arrived at our ‘secret beach’ only to find that a tour of kayakers had beaten us to it! A couple of hours later we arrived back at Port Quinn after an amazing kayak trip, to be recommended to all holidaying in this majestic part of the world.
Posted by Unknown at 04:23

Email ThisBlogThis!Share to TwitterShare to FacebookShare to Pinterest
Labels: A Kayak Pinic