How Cool is that - Manuka Honey Rules... 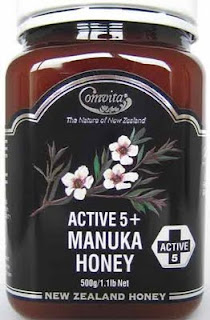 How cool is that? The National Health Service in the UK is finally cottoned on to the medicinal uses of manuka honey. The Royal United Hospital in Bath, is using medical grade Manuka honey and the sterilised larvae of the common greenbottle fly to treat patients and their wounds - especially leg ulcers.

Kate Purser, of the Royal United Hospital, told the Daily Mail: "...Doctors and patients have reported that the treatments are helping wounds to heal more quickly and is reducing the need for drug use."

Well any treatments which can successfully help people without conventional drugs has got to be a big plus, better for the patient and less expensive for the NHS. Let's hope other hospitals closely monitor the results of the Royal United Hospital and if successful also bring about a few changes in the treatment of ulcers and the other benefits associated with manuka honey.

As it happens, Randi's column for October 2009 is on the virtues of Manuka honey and is reproduced as follows:

"Manuka honey is fast becoming one of the most talked about natural foods with remarkable healing properties, used internally on anything from stomach ulcers, sore throat or IBS; or externally on wounds which are difficult to treat such as bed sores and leg ulcers, burns and eczema. Manuka honey has even been shown to kill off the MRSA virus. As well as being a natural source of sweetness and energy just like normal honey, Manuka honey has gained a reputation as one of the purest alternatives to maintain general good health and wellbeing.

The unique qualities of Manuka honey have been prized for many centuries, with references to its uses dating back thousands of years. It was the indigenous Maoris of New Zealand who first discovered the amazing properties of Manuka honey. The wild flowers of the native Manuka bush have a unique nectar, which when harvested by bees, produces one of the most highly sought after honeys in the world.

Studies on Manuka honey have shown that it contains an ingredient with powerful antibacterial, anti microbial, antioxidant, antiseptic, anti-inflammatory and anti fungal properties. This ingredient was originally named UMF, or Unique Manuka Factor. The honey you buy today is graded according to the active strength of this UMF, and the higher the UMF rating, the higher the potency of the honey. Look out for the UMF trademark on jars to differentiate between active UMF honey and ordinary honey from the region.

When used externally, Manuka honey creates a moist healing environment which allows new skin cells to grow across the healing wound flush with the surface of the wound, preventing scarring and deformity of the skin. It then helps regenerate new skin growth and hastens the healing process. The viscosity of Manuka honey provides a protective barrier, preventing wounds from becoming infected. Once the healing process is established, Manuka honey causes scabs and dead skin cells to lift off the surface of the wound, leaving a clean healthy wound bed in which the regeneration of skin tissue can occur.

At Elixir we have found again and again that this innocent little food with no side effects has been able to get rid of troublesome conditions where nothing else has worked. The only word of warning is for diabetics who should have a word with their medical practitioner first, and it should obviously be avoided by anyone with an allergy to honey. "

If you are in the area, pop in and speak to our staff or pick up a bottle of the golden essence of the bee.

By Randi Henderson
Posted by Unknown at 07:50

Email ThisBlogThis!Share to TwitterShare to FacebookShare to Pinterest
Labels: How Cool is that - Manuka Honey Rules...