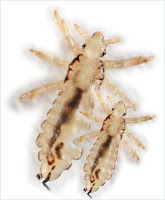 Ever since our government stopped funding the post of  "Nit Nurse," schools have seen minor epidemics occur, driving parents to pull their hair out with frustration. Political correctness has worsened the situation, with schools having to follow clumsy protocol when head lice are detected among students.


So, what are these pesky infestations? Head lice are wingless insects. They are grey or brown, have six legs and are about 1 to 3mm in length when fully grown (the size of a sesame seed). Female head lice lay eggs that are smaller than a pinhead and these attach to your hair close to the scalp. The eggs hatch about seven to 10 days later. Young lice are called nymphs - it takes about 10 days for them to become adults and capable of laying new eggs.

The best way to prevent head lice spreading is to check your whole family's heads regularly and treat them as soon as live lice are found. There is no need to treat bed linen, towels or hats with insecticides. They cannot swim, fly or jump and are not caught from objects like the backs of chairs. Head lice don't survive away from the scalp and can only pass from person to person by head to head contact. Pets don't spread human head lice.

The great annoyance is that not all parents regularly treat their kid's hair, so re-infection goes on and on.

Finding the right product is also a mission. My advice is to keep well away from pharmaceutical products, basically insecticides which contain organophosphates, such as Malathion. Would you knowingly put nerve gas or sheep's dip on to your children's bodies? These are poisonous chemicals that can play havoc with the nervous system.

You may wonder why the government doesn't ban the use of organophospates.  The plot actually thickens. There have been compensation claims by sheep farmers against organophosphates as a requirement to dip sheep in it. If the government agrees to its ban, there would be a great raft of compensation claims by those who have suffered symptoms from their use.

Interestingly enough, the MoD does not yet recognise Gulf War Syndrome as a debilitating condition and veterans who have left the armed forces due to ill-health following exposure to organophosphate insecticides are not eligible to take up disability pensions. A government ban would be tantamount to acknowledging there is a problem with that chemical.

In addition, if the government were to ban organophosphate products, it would have to pay potentially huge sums in compensation to the chemicals industry for withdrawing licences (Marketing Authorisations) that have already been issued. At present, the government's position remains that organophosphate pesticides are safe, if used in line with the manufacturers' instructions. But I wouldn't personally go anywhere near them.

Anyway, Delacet Herbal Head Lice Solution is a brilliant Herbal Head Lice Treatment, which has stood the test. We have many in-store customers who are satisfied with its effectiveness as a treatment for head lice.

Incidentally, Why a comb? When lice hatch they leave empty shells called nits attached to the hair. Nits are white and you may mistake them for flakes of dry skin. Unlike dandruff, nits stick to the hair and you won't be able to remove them with normal shampooing.  With Delacet, combing is not needed but it it is one way of getting rid of the dead eggs, as Delacet kills both the head lice and eggs.

You mustn't feel guilty that you have let your kids down as a parent if you detect nits.  So much mis-information suggests that the spread of nits is to do with unhygienic hair.  A lot of rubbish. Head lice can be found in all types and lengths of hair - having head lice is not a sign that your hair is dirty. They are just as often found living in clean hair. Anyone can get head lice, but they are most common in children aged between four and 11. This may be because of their close contact with each other at school. Girls seem to be more likely to get them than boys.

For some reason, every year there is a shortage of Head Lice Treatment products. That may be in part because the message is getting through to parents to avoid insecticide treatments for nits, as the annoying fact that European Legislation has removed perfectly safe natural products. So, altogether, the market is lacking in as wide a choice as there once was.

So be prepared this school term and stock up on your Delacet Herbal Head Lice Treatment.

To buy Delacet Herbal Head Lice Solution click here, or on any of the links above. If you wish to speak to a customer adviser about this product, you an telephone us on 01208 814500 for further information.