Wadebridge ‘Save our Supplements’ campaign receives boost from local MP 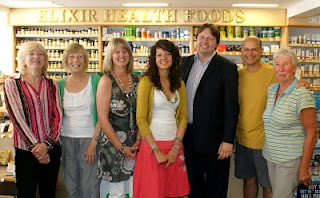 Dan Rogerson is backing the ‘Save Our Supplements’ campaign with Elixir Health Foods.

North Cornwall’s MP, Dan Rogerson, has given a boost to the campaign to stop alternative medicines and vitamin supplements being over-regulated by the EU.

He visited Elixir Health Foods in Wadebridge to meet the Henderson family, who run the business, to discuss the range of products they offer, and to meet their team and some customers.

But their business could be under threat if EU institutions bow to pressure from governments like that in France and Spain, which are lobbying for very low, restrictive maximum permitted dose levels for the supplements many Britons take each day to support their diet.Commenting,

“The ‘Save Our Supplements’ campaign has worked hard to get to a position in which there is the potential for regulations which – instead of threatening supplements – actually open up the market and ensure that an even wider range of safe and appropriately labelled supplements are available.

“However, all that progress is under threat while particular governments try to use this as an opportunity to restrict the doses people are allowed to take.

“There’s even talk of maximum sized packages as though something as harmless – and indeed beneficial – as a vitamin supplement should be regulated in the same way as potentially dangerous products like paracetamol.

“I am right behind the Henderson family and everyone at Elixir Health Foods in fighting undue restrictions in this area.”

“It is very worrying that an estimated 7000 health food stores in the UK could close as a result of this unwarranted EU directive, leading to a potential loss of tens of thousands of jobs – which is the last thing any of us need at a time like this! If this was actually done to protect people’s health, everybody would appreciate the need for legislation, but unfortunately the policies seem to be drawn up by people who have no understanding of supplements and there appears to be very little science involved in the decision making.”
Posted by Unknown at 03:24

Email ThisBlogThis!Share to TwitterShare to FacebookShare to Pinterest
Labels: Wadebridge ‘Save our Supplements’ campaign