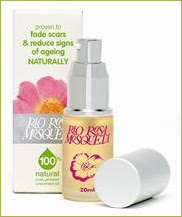 Women around the world want smooth, young looking, silky soft, glowing, wrinkle free skin and Mother Nature has provided a wonderful rosehip oil to achieve this. It is made from a wild rose called Rosa Affines Rubiginosa, commonly known as, Rosa Mosqueta which grows in the southern slopes high in the Chilean Andes.

Its fabulous anti-aging and skin rejuvenating properties have been the best kept beauty secret of South American women for centuries. For those of you who like a bit of science, the oil has been well researched since the 1980’s and have been found to contain exceptionally high levels of essential fatty acids (mainly Omega 3 and 6) which are essential to skin regeneration, as well as Retinoic acid, which is a derivative of Retinol (vitamin A).

It is these essential acids that are used by the body to produce hormone-like substances which encourage cell growth. These new ‘perfect’ cells slowly migrate to the surface, creating fresh new hydrated skin and eventually fading scars and blemishes.

In clinical research, both in Europe and South America, pure Rosa Mosqueta oil has been proven repeatedly to significantly reduce scars and stretch marks – including severe post-operative scarring - and combat wrinkles and other signs of skin aging. It is very useful for fighting the effects of sun damage, which is characterised by wrinkles, rough, leathery inelastic skin with brown age spots.

At Elixir I have seen many people benefit from the remarkable properties of Rosa Mosqueta oil, including my own children at various points. My daughter, Harriet, once had her face a bit too close as she blew out a tea light and ended up with a face-full of burning hot candle wax. It really looked like she was going to be scarred for life, with large burns all over her face, but after using Rosa Mosqueta oil regularly over a period of time the marks completely disappeared – and healed up in record time! And those of you who know Ryan will not be surprised to hear he once picked up a blowtorch by the wrong end, and ended up with a finger which he described as looking like ‘cooked chicken’. According to the hospital a skin graft was required, and he was duly booked in for the procedure. However, Mother got in there first with the Rosa Mosqueta oil and by the time he went for his appointment ten days later, he was dismissed by a rather mystified surgeon who could not believe how well the finger had healed – skin graft not required!

The brand we prefer at Elixir is the Rio Rosa Mosqueta, as it is 100% pure oil with no additives, chemicals or perfumes. After all, Catherine Deneuve has used it as a night oil for years to keep her youthful looks, and she is not doing too badly! A little goes a very long way. You should not use the oil on an unhealed or open wound, but it can be applied to scar tissue as soon as the wound is healed or the stitches have been removed. Rosa Mosqueta is very good for reducing acne scars, but should not be used on active acne, open eczema or very oily skin.

To buy Rosa Mosqueta Oil click here, or on any of the links above. If you wish to speak to a customer advisor about this product, you can telephone us on 01208 814500 for further information.

By Randi Henderson
Elixir Health Foods
Posted by Unknown at 06:33