SOLGAR'S BETA GLUCANS: THE ALTERNATIVE TO ...COLDS AND FLU

Well, winter is round the corner yet again, and I don’t know about you but I’ve already come across lots of people sniffling into their hankies. For many years scientists have wondered why people are more susceptible to colds and flu in the winter time, and in recent years a new theory has emerged. The suggestion is that low levels of vitamin D in winter increase people’s susceptibility to viruses, and research is beginning to show that this may be correct. 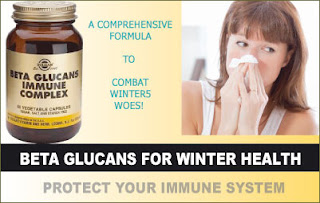 At Elixir, we have found a great way of keeping colds and flu at arm’s length: Beta Glucans Immune Complex by Solgar. This great remedy is a mixture of several things which are vital to a fully functioning immune system, including vitamin D. As they name suggests however, the star of the show is Beta Glucans which you may not have heard of before.
Beta Glucans are found in the cell wall of fungi and yeast, and in our not so hygienic past these would have been consumed in far greater quantities in our general diet. In Victorian times these natural yeasts were consumed in large amounts, and it is this which is attributed to their long life span. Beta Glucans are required for innate immune function and help prime the immune system. This in turn helps to reduce the symptoms as well as reduce the length of the common cold. Studies have also shown that those taking Beta Glucans have significantly less upper respiratory infections; and when given to hospital patients, length of stay was reduced by 40%.

Solgar’s Beta Glucans Immune Complex also contains zinc, which reduce the viruses ability to attach and reproduce in the body; vitamin C which increases white blood cell levels and reduces both duration and recurrence of the infection; and selenium which stimulates the immune response of the body. Additionally, there is also a lovely blend of berries in there: elderberry extract which is a powerful antioxidant which research has shown to be effective in shortening the duration of Influenza A and B, and at least 68.37% effective against the H1N1 strain (swine flu); blueberry which inhibits bacteria; and acai extract which again is a very powerful antioxidant.

It is interesting to note that the US Army has been aware of these facts for some time. Starting in the late 1980’s, it ran an exhaustive test programme to measure the immune-protective effects of Beta Glucans and over 100 other immune-stimulants, and as recently as 2004 reported that Beta Glucans were the most effective of all. Not only did they protect against infection with bacteria, viruses and fungi, they also conferred protection against radiation injury. Given that soldiers may at any time face an unpredictable range of biological weapons or even radiation, the US Army began to stock-pile Beta Glucans. To this day they keep significant amounts in readiness, to be issued as and when circumstances dictate.

You may not want to stock-pile Beta Glucans, Washington style, but now is definitely a good time to try it for yourself. Not only are there a lot of coughs and colds out there, we are also reducing the price of a pot of Solgar’s Beta Glucans Immune Complex – just bring the coupon with you. There are no known contraindications or drug interactions to these naturally occurring ingredients; but as always, consult your healthcare professional before taking it if you are concerned.


To buy this product click on the following link: Elixirhealth.co.uk. You can also view this product at our Solgar Health Store website, where we sell a range of other branded products. If you wish to speak to a customer advisor, you an telephone us on 01208 814500 for further information. We're always there to help.

By Randi Henderson
Elixir Health Foods
Posted by Unknown at 08:03

Email ThisBlogThis!Share to TwitterShare to FacebookShare to Pinterest
Labels: THE ALTERNATIVE TO ...COLDS AND FLU: SOLGAR'S BETA GLUCANS COMPLEX