This must rate as the time of year most of us could do without. Sorry if it happens to be your birthday right now, but really, if ever we were to have a metric calendar, could we all vote to get rid of January and February please? The amount of coughing and sneezing we have at the moment is just astonishing, and it just seems to go on and on. 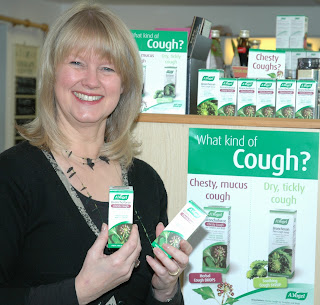 The bugs that cause the common cold often leads your body to produce masses of sticky, slimy mucus – all the better for trapping viruses and bacteria in, but it can be hard to shift once it’s settled in your lungs and respiratory tract. It’s fine if your cough is manageable and productive (to put it politely), but not so great if it doesn’t result in the expulsion of catarrh and continues unabated for ages. Coughing spasms are tiresome yet can prevent sleep, not just for the sufferer but from those around them as well. Lingering coughs can in fact last for up to three months after a common cold, according to the director of the Common Cold Centre in Cardiff.


Luckily, we have a remedy for this at Elixir which shifts it like magic. A Vogel’s Bronchoforce (which a lot of you know under its previous name, Ivy-Thyme Complex) works like an expectorant by thinning the mucus, loosening it from the respiratory tract and making it easier to expel.

So how does it do that, then? As the previous name indicated, the main ingredients are ivy and thyme. Ivy exerts an expectorant action on the respiratory tract which is great for all catarrhal conditions as well as chronic inflammatory bronchial disease. It also has antispasmodic properties, which helps to prevent and relieve coughing spasms. In other words, you cough less, but when you do it’s more productive. Thyme also helps with elimination and relaxing bronchial spasms, but also has a disinfecting effect on the airways.

If you think the taste of this excellent tincture is familiar, it is probably due to the addition of liquorice, an old favourite in cough remedies.

Since Bronchoforce is taken as a tincture – you put drops in water and drink it – it gets to work really fast. How fast it works for you obviously depends on how clogged up your mucous membranes are, but we have had many happy customers telling us how they felt better after only taking it once or twice, much to their amazement. Hence my description earlier on: it works like magic, and I am so pleased to have it in my herbal toolbox!

So, if you are suffering from a nasty, chesty cough which you would like to see the end of, now is a great thyme (hehe) to try it for yourself. Hopefully, this should lead to a swifter end to the cough, and a return to peaceful nights and painless throats.

As always, speak to your medical professional first if you are on medication, and don’t use if you are pregnant or breast-feeding. To buy Bronchoforce click here. If you wish to speak to a customer advisor about this product, you an telephone us on 01208 814500 for further information.

By Randi Henderson
Elixir Health Foods
Posted by Unknown at 08:09