Chances are you've experienced a skin irritation at some point in your life. This could be anything from a mild redness to frustrating swelling and itching to a severe case of blisters or sores. You may even be amongst the increasing amount of people who suffer from eczema or psoriasis on a regular, or perhaps permanent, basis.  Your skin is your body's largest organ and its primary layer of defense, so it often takes the first blow against stresses and irritants in the world around you. 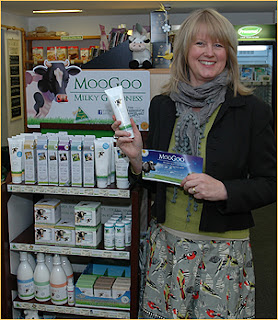 At Elixir, we have recently launched a new range of skincare products called MooGoo, which is aimed specifically at irritable skin conditions.  We have been inundated with positive feedback ever since – everything from eczema, psoriasis, cradle cap, nappy rash, acne, and fungal skin conditions have been taken care of.

MooGoo is an Australian natural skincare company which started up when they made a moisturiser for a family member with skin problems.  The cream was based on udder cream used in dairy farms, which is well known for its healing properties, but was a non-greasy, human compatible version full of skin repair ingredients.  Since then, MooGoo has expanded to make a range of products for skin problems, using full strength healing ingredients, edible oils and no chemicals, steroids or petroleum based ingredients.  All the products are so pure they can be eaten (although I don’t recommend it!), and are safe for use on babies.  Some of the most popular products are:

Irritable Skin Balm
Also known as Eczema and Psoriasis Balm in Australia where it is licensed.  This cream took over a year to formulate and is both anti-inflammatory and anti-fungal.  It relieves itching and flaking, and has wound-healing properties.  Can be followed by the MSM Soothing Cream moisturiser which is designed to keep easily irritated skin moist and supple.

Scalp Cream
Very helpful for seborrheic dermatitis, which tend to appear on scalp and hairline, ears, eyes or eyebrows and is often mistaken for psoriasis, but is in fact caused by a type of yeast which is common on skin.  Scalp Cream also helps treat cradle cap in babies, which can sometimes get out of control.

Skin Milk Udder Cream
This is the original cream that started it all.  Contains milk protein which has been shown to increase skin elasticity combined with natural moisturising oils.  Is being recommended by a number of oncologists and hospitals in Australia due to its efficacy in helping recovery from chemo and radiotherapy induced dermatitis.  Great for dry itchy skin.

Fresh Cream Deodorant
Recent scientific studies have shown possible links between aluminium based deodorants and various illnesses.  This is an aluminium-free product with Lemon Myrtle which works by creating a skin environment that encourages, rather than repels friends!

There are many other products available, so if you have a skin problem either pop into Elixir and check it out for yourself or give us a call on 01208 814500. While this range of skin care isn't available on our on-line store, if you live outside our catchment area we'd be glad to provide mail order, or assist in any other way we can.

By Randi Henderson
Elixir Health Foods
Posted by Unknown at 02:58