"Indicted" The People vs The Medical and Drug Cartel 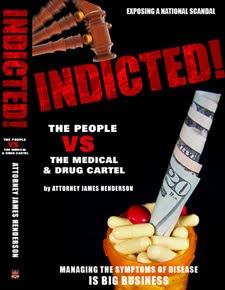 Once in a while a book is published which challenges the orthodox and makes us think outside the box. Attorney James Henderson’s book “Indicted! The People vs The Medical and Drug Cartel" is such a book, and is timely in its arrival.

Never before has the nanny state appear to unite around the world to “mind-forge” our reason and sensibilities and dictate to citizens of the earth custom and practice, as these censored times we live in now. The State’s centralisation of services, the growth of big businesses, tend to lead to the loss of individual rights (and inevitably freedom of speech). What we're left with is uniformity of choice, or the illusion of choice. We all despair at the manner in which city and town centres decline as the out-of-town shopping malls spread with their samey samey goods and services.

As far as governments go, some of the reasons for imposing “harmonisation” are put down to administrative efficiency and costs of production. Two invidious side-effects of that: commercialisation is contracted out to large organisations whose vested interests are less about people, and more about profit. And, if ordinary people wish to protest – even with Facebook and the internet as a means of achieving people power – influencing the course of our lives is nearly impossible.

In my neck of the woods, the European Union wishes to dictate to member states all matters determining the use of natural medicine, including availability of products, ingredients and dosages. We are told that national choices must be sacrificed to achieve harmonisation across Europe. On the surface it appears to be a legitimate tidying up of an unlicensed market. Below the surface, it’s hard not to suspect foul play, fuelled by pharmaceutical power and total control over people’s own health choices. Read more about this issue here - http://www.nutraingredients.com/Regulation/High-dose-supplements-fight-taken-to-EC-president. What a Pandora’s Box if you lift the lid on that one!

Well, in his ground-breaking book James Henderson does just that, lift the lid. In America the predominant feeling is that healthcare is only attempting to manage symptoms and not cure the underlying cause of disease. The debate is hotting up with a Bill presently in the CA legislature which “seeks to reduce health care costs and improve the standard of care for heart disease and diabetic patients by requiring physicians to give these patients the option, in non-emergency cases, of being referred out to intensive nutritional therapy and lifestyle changes, instead of receiving the standard milieu of drugs/or surgery.” You can read more about this issue here: http://www.camedicalchoice.com/

Henderson’s book argues that by allowing pharmaceutical medicine to cunningly continue treating chronic degenerative disease “by merely seeking to manage the symptoms of these diseases, not even attempting to cure them...drug-based medicine has become big business. It thrives on sickness...trading the health of millions of Americans for dollars.” Obviously, this discussion isn’t just restricted to America.

“Indicted!” (http://www.tatepublishing.com/bookstore/book.php?w=978-1-60604-325-7) grapples with the larger issue of our loss of individual rights, whether individually or as a people, a debate we should all hold dear to our hearts.

The views outlined above are mine alone but if you agree or disagree with these statements, please feel free to comment...
Posted by Unknown at 00:53

Email ThisBlogThis!Share to TwitterShare to FacebookShare to Pinterest
Labels: "Indicted" The People vs The Medical and Drug Cartel

Thanks Jason for your blog. You have certainly captured the essence of the issue. The urgency behind reform is not only stopping the financial hemorrhage to our state and federal treasuries, but reclaiming the health of Americans.

Many experts point out that the dangerous side effects of drugs used to "manage" symptoms, themselves result in a variety of new symptoms and new diseases. The fatal truth is that the drug intervention model of health care is driving the epidemics of chronic diseases now rampaging in our society.

We must reclaim our health. We can vote with our bodies and our dollars by exercising for better health and buying whole foods instead of the denatured refined food and using less red meats; and we can refuse to buy their drugs. Your Sincerely, Juice.