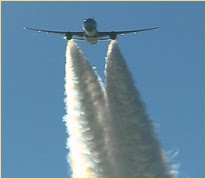 On the way to work I spotted a motorist wearing a face mask of the sort normally associated with the polluted atmosphere of large cities, the recent swine flu epidemic or hospital surgeons. Since I live in a small rural Cornish town in the South West of England, I was dumbstruck what catastrophe had occurred, what was up?

'Up', of course, is the operative word! The Icelandic volcano which has caused air traffic chaos in Europe and which is still erupting steadily may very well be at the root of the motorist's trouble. There hasn't been mass reports of people suffering respiratory ailments, which makes a media change; but those sufferers of asthma and other environmental allergies, such as viral or dust infections, perhaps are being suitably cautious.

An interesting device which may be helpful in respiratory problems is a gadget called The Salt Pipe Inhaler. We have had some positive feedback about the Salt Pipe. The manufacturers say that, "Its salty microclimate calms the cells of the respiratory system and induces their natural self-cleansing mechanism," and in a few minutes it helps you breathe more easily. Certainly the science behind The Salt Pipe Inhaler is sound enough and it's well worth watching the video below.

You can buy the Salt Pipe Inhaler from our online store, just click here.

Email ThisBlogThis!Share to TwitterShare to FacebookShare to Pinterest
Labels: The Salt Pipe Inhaler - Strengthening The Lungs

The more publicity about this great product the better!