Co Enzyme Q10 is a compound which plays a vital role in the production of energy. When you have a Co Enzyme Q10 deficiency, it will interfere with this process and can leave you feeling tired and lifeless. 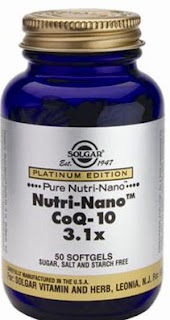 Studies have shown Co Enzyme Q10 to be effective in the treatment of chronic fatigue and as a general energy 'booster'. It may also enhance athletic performance. If you are prescribed statins, in discussion with your health care practitioner, consider supplementing with Co Enzyme Q10 as research shows that stores of this compound is depleted, causing for many people a loss of energy. It’s not for nothing that Co Enzyme Q10 is considered to be the spark plug in the body’s cells - the chemical catalyst helping with energy production. As an antioxidant it's good for cell membranes, cholesterol, fatty acids and tissues of the brain and helps with the healing and repair of gums tissue (that's why you'll find it in some toothpastes).
Co Enzyme Q10 has many other uses and you might want to read up on it yourself. The vitamin company Solgar has a form of Co Q10 called Nutri Nano Coenzyme Q10, which I especially like. Why is that? Well, strength, purity and absorbtion. Per tablet it's about three and a half times more potent than other brands of Co Q10. It's more cost effective since you only need one 30mg tablet a day as opposed to three 30mg tablets of other makes. And since quite a bit of the active ingredient is lost in transit through the stomach you should be taking around 100mg anyway. Nutri nano is a 'nano' form of Co Q10. That doesn't mean genetically modified, only that the particles are very fine, much smaller than other types. The advantage of that is that there is more absorbtion, allowing a greater amount of 'packagages' of the Co Q10 to reach the right sport without the traditional loss in transit.

In any event, consult your doctor if on any medicine and particularly if you are on heart medication.


To buy this product click on the following link and visit us at elixirhealth.co.uk or telephone us on 01208 814500 for further information.
Posted by Unknown at 03:05

Email ThisBlogThis!Share to TwitterShare to FacebookShare to Pinterest
Labels: Solgar Nutri Nano Co Enzyme Q10 - For Statins and Other Uses