Turmeric Spray from BetterYou for Joint Pain and Anti-Inflammatory Conditions

"Turmeric is a spice with an impressive list of uses and benefits, and is used in many cuisines around the world. It comes from the dried and ground root of a plant in the same family as ginger, and is well known for its bright yellow colour.

Turmeric is now of increasing interest because of its antioxidant content and ability to work as a powerful anti-inflammatory. Modern medicine recognizes its health benefits and it has been used extensively in natural and folk medicine for centuries. The benefits attributed to this colourful spice are the result of the curcuminoids it contains - the active ingredients in turmeric.

The problem is that turmeric is very poorly absorbed in the gut, meaning it’s not enough to simply eat a curry every once in a while!


At Elixir, we are excited that the world’s first Turmeric Oral Spray has just been launched in the UK, which has proven to be far more effective than the average tablets or capsules. Using molecular encapsulation, BetterYou’s Turmeric Oral Spray guarantees better absorption than tablets since it bypasses the digestive system altogether. This is great news as turmeric can have as low as 1% absorption in the gut. 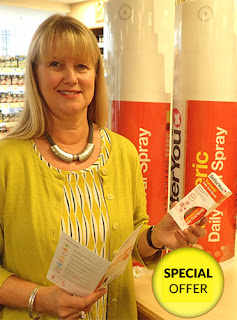 The unique formulation increases bioavailability (absorption), improves taste and delivers the active curcuminoids directly into the bloodstream via the inner cheek. It also ensures you do not suffer discolouration of your teeth, which would otherwise be a problem with a liquid formula.
The anti-inflammatory properties of turmeric mean that anyone with arthritis or rheumatism would find it very helpful. Its antioxidant properties have cell-protective actions including prevention of free radical damage, inhibiting the replication of damaged cells. Turmeric has also been used for digestive problems such as gastritis and hyperacidity, as it helps protect the stomach lining. By increasing the flow of bile into the intestines, the break-down of dietary fat is also improved.

BetterYou’s Turmeric Oral Spray uses natural ingredients and the orange flavoured formulation is suitable for vegetarians, diabetics and coeliac, and is safe to use during pregnancy.

At Elixirhealth.co.uk we have a July 2017 in-store SPECIAL OFFER of Turmeric Oral Spray, so now is an excellent time to try it for yourself.

If you are taking other medication please speak to your medical practitioner before taking any supplements.
Posted by Unknown at 01:25