Click here: Viridian Saffron Extract to view and buy.
The nights are getting longer and with less daylight this can bring on a condition known as SAD, seasonal affective disorder. Although the exact cause of SAD isn't fully understood, experts theorise that a lack of sunlight might stop a part of the brain called the hypothalamus working properly, affecting the production of the key mood and sleep hormones, melatonin and serotonin.
It’s also considered that lack of vitamin D synthesis, normally a process of the sun on the skin, can affect mood, and the Government recommends that everyone in the UK supplements with appropriate vitamin D from October to March to protect against deficiency. 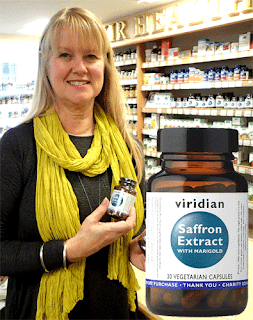 Another supplement which is gaining a significant reputation for its anti-depression qualities is saffron. That’s right, the herb you probably know best from your granny’s saffron buns and the paella you had on your holiday in Spain. However, saffron also has a long history in traditional healing.

In modern times, saffron’s health properties have attracted considerable scientific interest. Chief among them are studies on its uplifting and antidepressant activity, and research into enhancing cognitive ability. Studies also show that saffron is just as effective against other conditions for which antidepressant drugs are commonly prescribed, such as obsessive-compulsive disorder, anxiety, and Alzheimer’s disease.

Saffron has also been studied as a potential treatment for stress related over-eating. In a group of overweight women it was found that saffron supplementation for eight weeks resulted in a significant decrease in snacking frequency and body weight. Remarkably, newly published evidence demonstrates that saffron also works as adjunct therapy to reverse some of the unwanted side effects frequently experienced when taking conventional antidepressants.

At Elixir, we particularly like Viridian Nutrition’s Saffron Extract with Marigold as it is a totally pure product and one capsule gives you the correct daily amount of saffron. After reviewing a vast array of nutrition and herbal research, and speaking with leading experts, Viridian Nutrition has duly recognised saffron, naming it the ‘Viridian Ingredient of the Year 2018’ in further anticipation of its positive influence on health. Saffron extract together with vitamin D could prove to be the right programme to help you banish those winter blues.
This is a great time to try it for yourself. There are no known side effects but as always, if you are on other medication, speak to your medical practitioner before taking any supplements.
Click here: Viridian Saffron Extract to view and buy. By: Randi Henderson
Posted by Unknown at 11:04